Fry up some country ham that’s crispy, salty and perfect with a dip in red eye gravy. Truly southern at its roots, it happens to be keto and paleo friendly plus it’s gluten free. Get all the easy steps to bring this simple supper or breakfast to life in under 10 minutes.

What is country ham?

Country ham is preserved by curing with a blend of salt, spices and (sometimes) sugar to make what some people say is an “unpalatable” salty, crispy result. Country hams can be found whole in the south–often wrapped in the netting used for smoking–or you can buy it sliced and ready to fry.

It’s preserved and cured, so it’s not raw if that has you concerned. When frying country ham you only need to render the fat and get it crispy.

Should it be soaked to take out some of the salt?

If you’re not used to how salty it is, then maybe so. I’ve never seen too many southerners soak slices (whole hams are almost ALWAYS soaked though–that’s a whole different ballgame). If you felt like you just had to soak the slices, you can put them in some water or even a shallow bowl with some milk for a couple of hours before cooking. Remember to pat them dry really well before frying so they don’t splatter and will get crispy in the pan.

Yes it should be. You’ll want to watch to make sure your brand wasn’t cured or treated with extra sugar that might wreck your diet plans though. My particular brand comes from Clifty Farms and has zero sugar and zero carbs according to the label–it would be perfect for a keto diet. Most country hams do have nitrates and nitrites in them as well–keep that in mind if that’s a no-no for your diet.

2. Add coconut oil or other frying oil to your skillet. As your ham cooks, it will shrink, soften and release a bit of liquid. That’s fine. Just keep frying.

3. After 8 to 10 minutes, your country ham slices should be crispy and golden. Add additional frying oil of your choice (I use refined coconut oil) if the pan looks dry and to encourage browning.

What to serve with fried country ham

You’ll want something to offset its saltiness. I always serve very thinly sliced pieces of ham (a little goes a very, very long way) with fried apples, buttermilk biscuits, and homemade grits that have been lightly seasoned. Of course red eye gravy is also a must if you want the full experience. 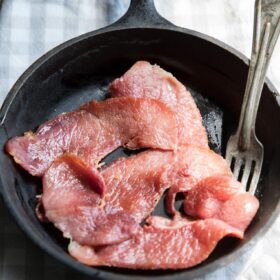 How to Fry Country Ham 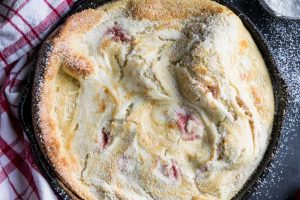 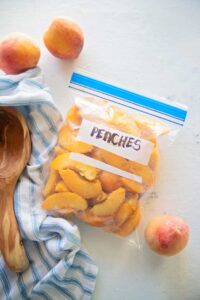 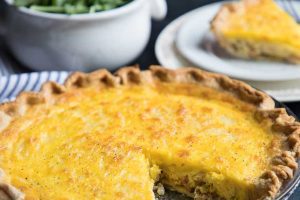 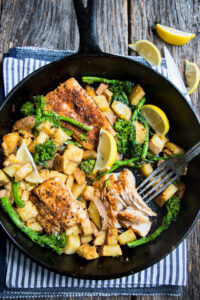 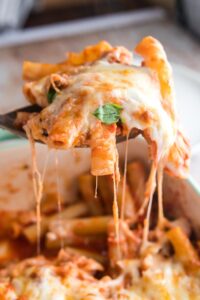 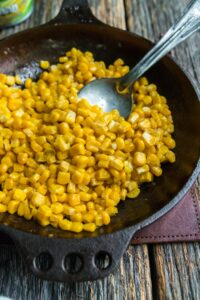